The day just kept getting better

We hiked into the village of Kalkanli around 10:30am, tired, sore and sunbeaten with Alexi and I arguing politics. Although it was early in the day, we needed a break.

We checked out the center of town and entered a café where the men of the village were reading the paper, chatting and playing some spirited backgammon. 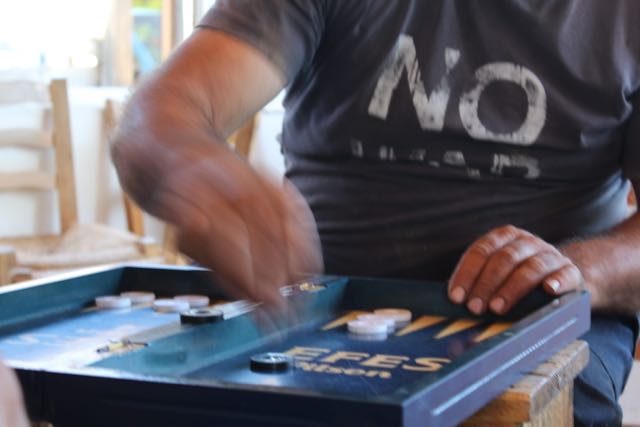 Everyone stopped what they were doing and looked at us. Their look which seemed cold was probably of confusion to see three tourists with backpacks in their village. There was one empty table with no chairs so I awkwardly grabbed some chairs and we had a seat. No one came to take our order, but an English-speaking villager our age asked what we wanted and relayed it to the kitchen on his way out the door.

We did not fit in here.

We sat, and drank our Turkish coffee as the locals did. Anna and Alexi played backgammon as the locals did, and one of the local men treated us for the coffees. He did not speak English, but he seemed happy to have us there.

It was getting better.

Before long Alexi had bridged the gap and was in a heated best of 7 backgammon series with the man who treated us to coffee, throwing dice and slamming pieces all over the board. Well, mostly Alexi’s opponent was doing that, Alexi was trying to keep up with the frenetic pace of this backgammon professional. A crowd of a dozen café-goers had now gathered around the backgammon board and was playfully joining the excitement. 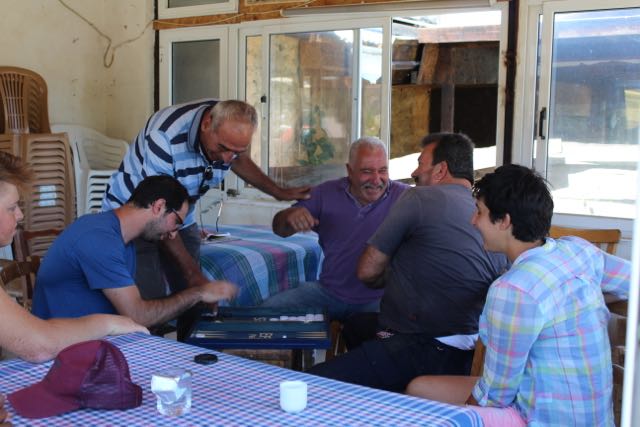 After going down two games to zero, Alexi came storming back (with the help of other villagers taking his side) to win the series in the last game. A new friend Mehmet Yildirim spoke some English and was able to help us with some light translations.

Once the commotion from the backgammon had settled, we were invited next door by Alkan Kaymakamtorunlari(the man who treated us to coffee and played backgammon with Alexi), Mehmet and Kemal Kisaoğlu for Doner kabob.

It was getting much better. 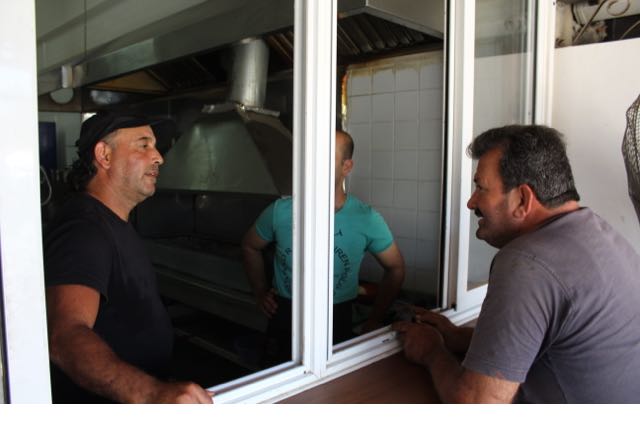 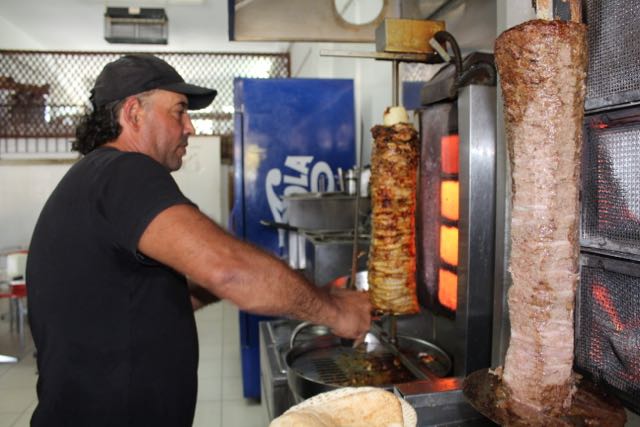 We sat at the restaurant next door and ate delicious döner kabob with our friends who were just as thrilled to be there as we were. 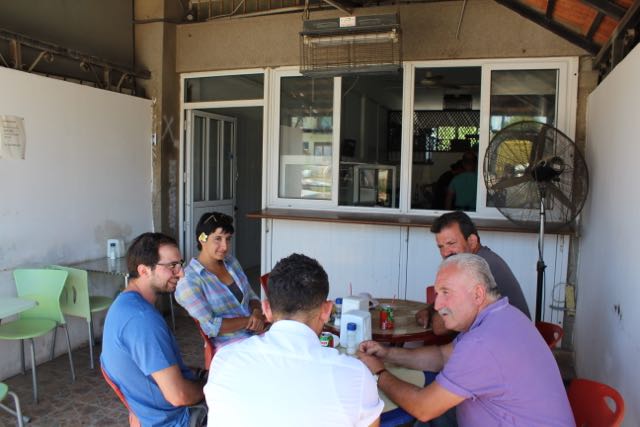 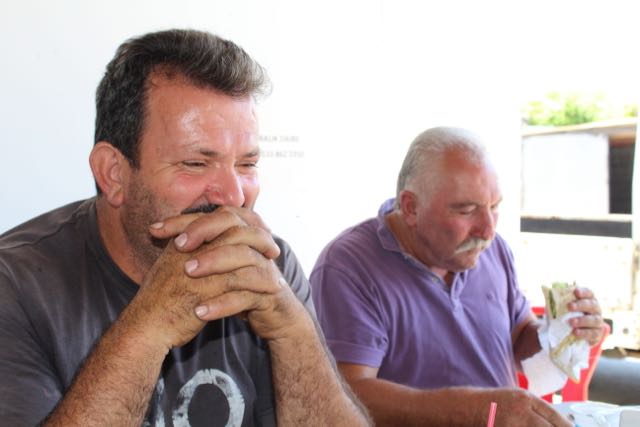 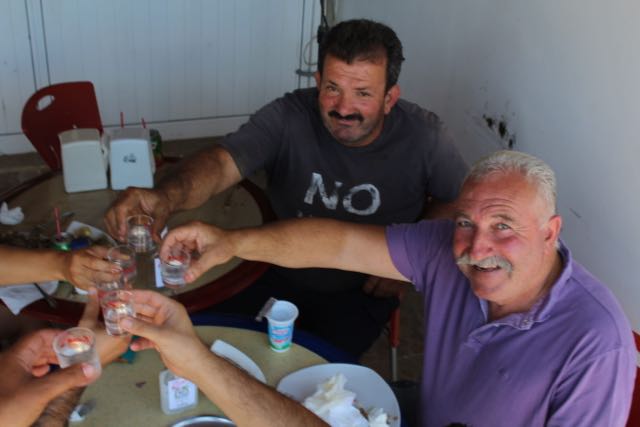 Though we couldn’t communicate much we were all having a good time so we went back to the café for another coffee. Soon after, we discovered that they spoke Greek and are Turkish Cypriots, originally from Paphos in Southern Cyprus. We spent the day playing cards and backgammon, drinking coffee, and hanging out like locals, with the locals. 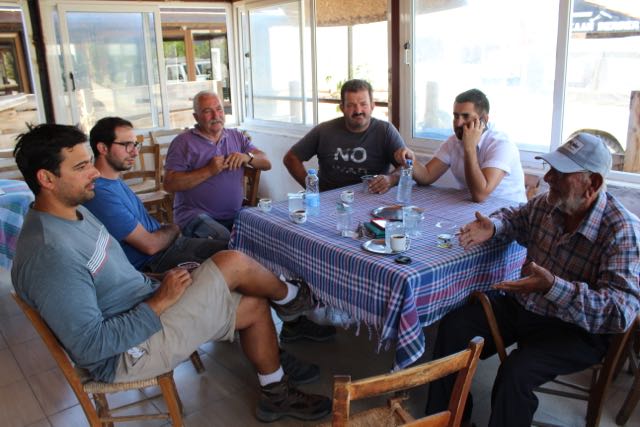 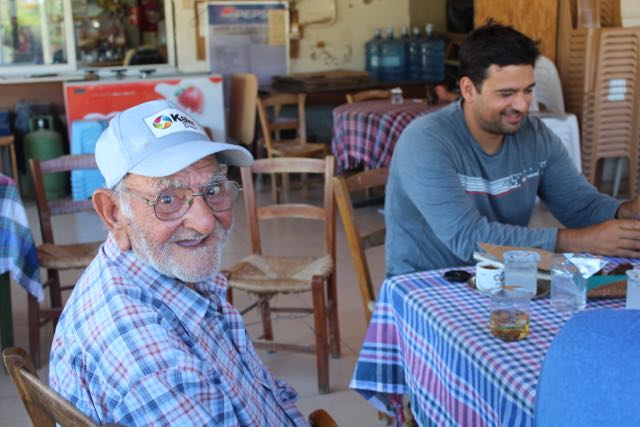 Oh, and we all got haircuts at the barbershop next door (the other direction) to the café. 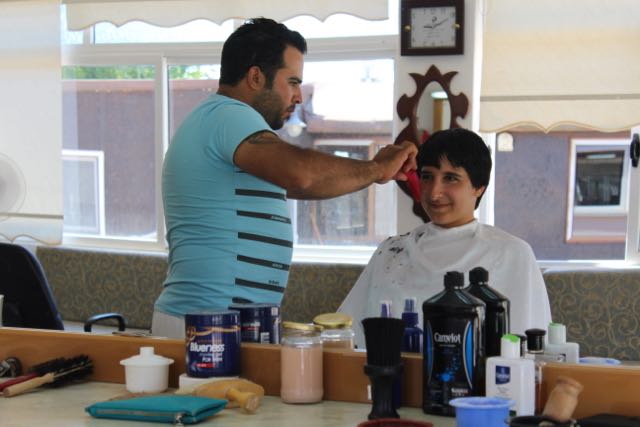 That night, we joined Kemal, Güney Saramali and Alkan for an incredible dinner of meze that was very similar to the meze of the south. We ate too many great things to list them all, but among the highlights were grilled quail, pickled quail eggs, sheftalia, coupes and bourekia.

We got to discuss in further detail the segregation of the island at dinner.

They do hope for the unification of Cyprus. Since they are originally from the south they carry Cypriot identification, and can legally go back to their homes to repair and live in them. But for the most part it seems they have settled their lives and are happy with their village. Going back to renovate would be a difficult and costly venture. Another young man Gune added “I was born [in Kalkanli]. My life is here. Why would I leave to go back to my grandfather’s house? I have little connection to it now.”

Kemal believes the unification can happen and can be successful, but each side needs to learn the other’s language in school. “The roads have been opened for 13 years now. If we started teaching the Turkish Cypriots Greek, and the Greek Cypriots Turkish, the seven-year-old kids from that time would now be 20…We are the same. We look alike. If we spoke the same, the country could be more unified. We have lost a lot of time already. This needs to happen.”

The Greek term filoxenia is difficult to explain, but the people of Kalkanli have it. We could not be more grateful for the people we met, and time we shared with them. 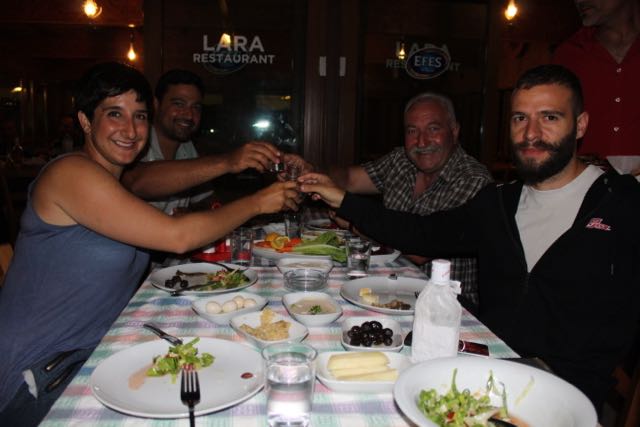 Thanks guys, we loved it.